In 1968 a guard from the Louisiana State Penitentiary (Angola) ran his metal detector over a nearby hayfield in West Feliciana Parish and made one of the most remarkable archaeological discoveries ever found in the state of Louisiana. He had stumbled upon a former village site and cemetery of the Tunica people, who had lived there in the mid-1700s. When he dug into the ground, he unearthed a vast array of brass and iron kettles, skillets, axes, hoes, knives, muskets, and other tools. Along with them were an assortment of European ceramics, glass bottles, Native pottery, and thousands of glass beads. These grave goods had been buried along with human remains in funeral ceremonies.

The guard dug for months and accumulated a diverse assortment of artifacts. Unfortunately, he had no training in archaeology, so his excavation techniques were inadequate. In pulling the artifacts from the earth he destroyed much contextual information. He would despoil several graves in an afternoon, graves that would have taken an archaeologist weeks to excavate and record properly. The treasure hunter is only interested in artifacts for their monetary value, while the professional archaeologist values the artifacts for what they can teach society about the culture and history of the people who used and buried them.

The Tunica Indians were a small tribe who lived in the Mississippi Valley. Hernando De Soto encountered them in northwestern Mississippi in 1541. They moved to the banks of the Yazoo River sometime in the seventeenth century, and then to West Feliciana Parish in the eighteenth century, settling near the site where the “Tunica Treasure” was discovered. Native and European trade and ceremonial goods sit side by side in storage at the Tunica-Biloxi Cultural and Educational Resource Center. Photo by Brian Pavlich

Meanwhile, the French were exploring and colonizing the banks of the Mississippi River. In need of Native allies, they cultivated a friendship with the Tunica. A French missionary was placed among them, and trading relationships were established. The Tunica supplied the French with salt and horses, and they became reliable military partners in expeditions against tribes unfriendly to the French, particularly the Natchez. This intimate religious, economic, and military relationship was rewarded by the French with an abundance of artifacts of European, mostly French, manufacture, especially metal tools that were highly desired by Native peoples who did not possess a metallurgical technology. The special relationship of the Tunica with the French is revealed by the unusual quantity and variety of other artifacts included with the Tunica Treasure, such as ceramics and ornaments, which were luxury goods.  The Tunica were so well supplied that the chief of the Tunica at this time, Cahura-Joligo, was described by early chronicler Pierre de Charlevoix in his 1744 Histoire et Description générale de la Nouvelle France as

“dressed in the French fashion, and seemed to be not at all uneasy in that habit. Of all the savages of [New France] there is none so much depended on by our commandants asthis chief. He loves our nation, and has no cause to repent of the services he has rendered it.He trades with the French, whom he supplies with horses and fowls, and he understands his trade very well. He has learned of us to hoard up money, and he is reckoned very rich.” 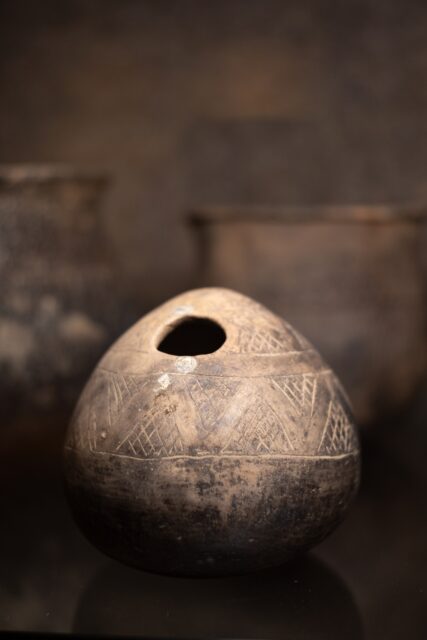 Pots like this are called “seed jars,” though their actual purpose is not certain. Photo by Brian Pavlich

When this remarkable collection was brought to my attention in 1970, it happened to fit into an ongoing archaeological project surveying Native sites. The Lower Mississippi Survey, operating out of Harvard University, had been exploring the Mississippi Valley for thirty years, working south from Arkansas and Tennessee into Mississippi, and was just about to start a series of excavations around Natchez, Mississippi. The Natchez Indians had been archenemies of the Tunica and the French, so the Tunica Treasure provided valuable insight for our study, since it exemplified an example of positive French–Indian interactions to compare with the more antagonistic Natchez example. At the time, we knew of the Tunica Treasure but did not know where it had been found; we believed that it was somewhere near Natchez, for the tribes were neighbors at that time. When the location of the site was finally disclosed, we undertook a preliminary excavation in 1972 to confirm it was the locus of the collection and to reconstruct as much contextual information as we could. We discovered graves that had been looted but still contained pieces of artifacts that joined other pieces in the collection. Thus the archaeological value of the Tunica Treasure was greatly increased, and the Tunica story began emerging from the mists of the past.

At the conclusion of the Natchez program, a new study was launched that assumed a larger perspective: an investigation of the Tunica from first encounter by Europeans to the modern day.   Around 1800, the Tunica moved from West Feliciana Parish to the area around Marksville, Louisiana, and their descendants still live there. We thus developed a program that would confirm archaeologically the entire known history of the Tunica as they moved from northwestern Mississippi to the Yazoo River, then to West Feliciana Parish, and finally to Marksville. At each location, we reconstructed the culture of the Tunica and studied the changes that occurred through their increasing contact with Europeans and their American descendants. The Tunica Treasure provided a solid datum at the midpoint of this historical record. It was also a high point of their successful interactions with the European interlopers. Fleur-de-lis designs are barely discernible on this iron pot. Photo by Brian Pavlich

In common with most Native groups, the Tunica suffered from increasing European encroachment and government policies prioritizing settlement and agriculture. By the twentieth century, the Tunica had lost their colonial-era prominence. They had intermarried with some other tribes, especially the Biloxi, but still retained their Tunica identity. For generations, they had been trying to gain federal recognition as a tribe, but had no success. They could not prove their tribal history to the satisfaction of the Washington bureaucracies.

The Tunica Treasure changed all that. Our research provided archaeological proof the tribe had existed from first European contact to the present. As a result, the tribe was formally recognized as the Tunica–Biloxi Tribe of Louisiana, first by the State of Louisiana in 1975 and then the federal government in 1981. This recognition gave them sovereign status and access to federal programs that substantially improved their standard of living. They also have built a successful casino resort, which extracts significant revenue from their non-Indian neighbors, and have expanded into other ventures including film investment. Today, the Tunica are thriving, with active programs maintaining cultural traditions and reviving their language. But what happened to the Tunica Treasure? The original finder had loaned the collection to the Peabody Museum for study and possible purchase in 1970. But when it became apparent that the finder had dug into that hayfield without the permission or knowledge of the landowners, we adopted the fiduciary duty of temporary custodian until the legal ownership of the collection could be decided. The finder then brought a lawsuit against the landowners in 1974, claiming possession of his finds under the Louisiana civil code, article 3421: “He who finds a [movable] thing which is abandoned, that is, which its owner has left with the intention not to keep it any longer, becomes master of it in the same manner as if it had never belonged to anybody.” As the suit was moving through the courts, the state of Louisiana intervened in 1975 in an effort to preserve the collection and exercise some control over the outcome of the legal process with an eye toward setting precedents favorable for the preservation of archaeological sites in the future—in short, to curtail such illicit treasure hunting. The collection was then moved back to Louisiana and stored in New Orleans as the legal maneuverings continued. Finally, the Tunica themselves joined the lawsuit in 1981, claiming rightful ownership of their heritage. The case was decided in their favor by the local parish court in 1986 and confirmed by the state supreme court in 1987. The Tunica took possession of the artifacts and built a museum on their reservation shaped like an ancient Tunica burial mound. Due to water intrusion that caused foundation instability and damage that was cost-prohibitive to repair, the museum was torn down in 1999.  In 2011, the tribe opened the 40,000-square-foot Tunica-Biloxi Cultural and Educational Resources Center (CERC) complete with a state-of-the-art preservation laboratory and museum.

But the legal ramifications of the Tunica Treasure did not end there. In 1990, spurred by the case of the Tunica Treasure along with other conflicts among tribes, discoverers, academic institutions, and local governments, the US Congress passed the Native American Graves Protection and Repatriation Act (NAGPRA), which requires that human remains and associated cultural artifacts from federal or tribal lands, and collections of such in institutions that receive federal funding, must repatriate those items to the tribes or their lineal descendants that can be identified.

And so, this monumental collection, the Tunica Treasure, was the genesis of a fascinating archaeological study, the rebirth of the Tunica tribe as a legal entity, and major legislation by the state and federal government protecting archaeological sites and the rights of Native peoples to tangible aspects of their cultural heritage.

The struggle for federal recognition continues for several of Louisiana's Indian tribes.