The boom and bust story of the Long Leaf sawmill

The supply seemed inexhaustible. Up through the latter decades of the 19th century, from the banks of the Sabine River in the west, to the floodplains of the Mississippi in the east, and tapering out before reaching the Attakapas prairie and coastal marshes to the south, a vast old-growth pine forest formed a canopy over most of Louisiana. The towering conifers, many of them 150 to 200 years old, had barely felt the axe of pioneers and planters who had sparsely settled the northern half of the state. But in the course of four decades, from the 1880s to the 1920s, through the combined forces of ambitious capitalists, razor-edged metal and the brute strength of sinewy laborers, trees were felled by the thousands and fortunes were made in the millions. Settlements grew up around sawmills virtually overnight, but the green in men’s pockets came at the expense of a verdant woodland quickly reduced to a denuded stumpscape.

Louisiana’s short-lived logging empire ended with company towns turned to ghost towns, saw blades and hauling equipment reduced to rust, and a cut-over terrain requiring the nurturing care of conservationists. One location in Louisiana tells this story of boom, bust, renewal and the future of the lumber industry in remarkable detail: The Southern Forest Heritage Museum in the town of Long Leaf, site of a preserved sawmill complex and company town that operated from 1893–1969. This 1919 Clyde Rehaul skidder, the last surviving machine of its kind in the world, exists today at Long Leaf without its booms. Enough booms are present on the site to enable a complete reconstruction. Courtesy of Southern Forest Heritage Museum, Photo by Everett Lueck.

“These were the days of giant trees, giant mills, and giant lumbermen,” wrote historian Anna C. Burns. The emergence of a “New South” rising like a phoenix from the Civil War made for a business environment primed to welcome financiers eager to exploit the untapped wealth of Louisiana’s timberlands. Forests in the Northeast and Midwest had been expended, and 85 percent of Louisiana was estimated to be covered in harvestable trees. Cheap land, high demand and new rail lines paved the way for expeditious prosperity. Among these investors was Caleb T. Crowell, a lumber company owner from Arkansas who initially seized upon building a new life for his family in California. When his Golden State dreams went awry in 1883, Crowell returned to the Arkansas town of Stamps where he founded the Bodcaw Lumber Company in 1886. By 1889, he sold that mill and formed the Black Lake Lumber Company in Dubberly, Louisiana, all the while hoping to regain enough financial footing to give relocation to the Pacific Coast another try.

Just when he was ready to repeat his move west in 1893 by sending his family ahead to Los Angeles, Crowell followed behind solo but but opted to take a new rail route out of Alexandria. Impressed by the thick pine trees visible from the window of his train car, Crowell made an impromptu stop in the Louisiana town of Glenmora, where he met John Evans. The men surveyed the area, and impressed by its logging potential, they engaged a third party, Alexander B. Spencer. In April of that year, Crowell and Spencer recorded their first timberland purchases. Two months later, the men took over an inactive sawmill and surrounding property which became the company town of Long Leaf. Caleb ultimately left for California and did not return until 1919, but in 1895 he sent his oldest son, J. Stamps, to apprentice under Spencer who had been left in charge of managing the new enterprise. In 1902 Spencer relocated to San Antonio and thereafter generations of the Crowell family ran Long Leaf for the next 67 years. 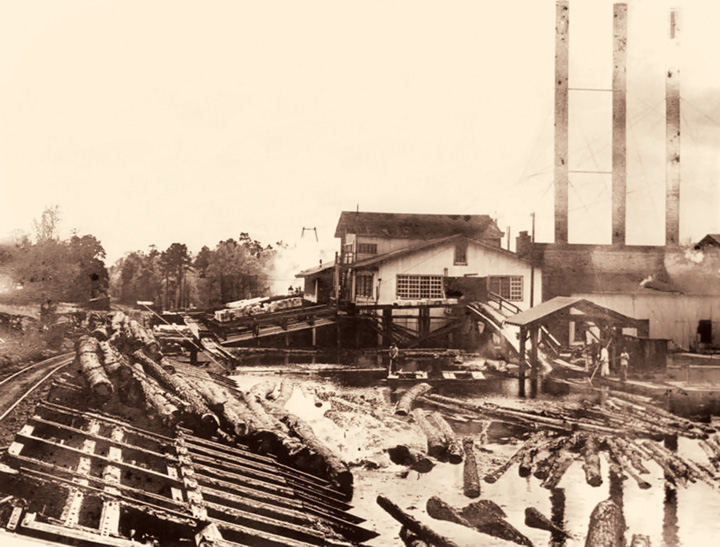 The Crowell and Spencer sawmill at Long Leaf as it appeared in the 1930s with a log pond and dump track in the foreground. Courtesy of Southern Forest Heritage Museum, Crowell Family Collection.

In 1880, Louisiana ranked 30th in the United States for the dollar value of its timber product. By 1900, it ranked 10th in the nation, and by 1920, second. In some years in the 1910s, the state led the country in timber production. Long Leaf played a role in these numbers, but it was not the largest operation of its kind in the state.

The mill at Fullerton, in Vernon Parish, cut 500,000 board feet per day, and the McNary mill near Long Leaf 600,000. Bogalusa was home to the world’s largest mill, boasting one million board feet a day. “Those people cut a lot of timber and cut it a lot faster,” says Everett Lueck, president of the Southern Forest Heritage Museum, who notes that by comparison, Long Leaf stacked 125,000 board feet per day. He describes the Crowells’ approach to the lumber industry as “prudent operators who cut at a prudent rate.” And the Crowells regenerated their stock by planting new seedlings as they cut.

This forward-thinking business model proved fortuitous in the 1940s when New Orleans boat builder Andrew Higgins sought the Crowells for a federal defense contract during World War II. Long Leaf would play a crucial but unheralded role in the Nazi defeat.

Higgins had invented the Eureka boat in 1926, a shallow-draft craft that serviced the oil industry in the marshlands of South Louisiana. The vessel’s design depended on three main structural components that required longleaf pine, a durable wood resistant to rot in salt water, and the Crowells supplied most of this heartwood. By World War II few mature-growth longleaf pines were left standing in the U.S., but portions of the Crowells’ timberland contained these trees that became vital to the U.S. Navy. The Eureka boat became the model for the landing craft deployed for the D-Day invasion of 1944. Higgins sent foresters known as “cruisers” into the woodlands to scout out individual trees large enough to construct the amphibious troop carriers. “It’s highly probable that as many as 10,000 boats were made with timber cut and milled at Long Leaf,” says Lueck. “Without this mill the war would have lasted two years longer.”

A telegram from R.D. Crowell to President Franklin Roosevelt states: “This company and it’s stockholders, motivated only through patriotism and loyalty to our country, are daily depleting their scant resources of virgin longleaf yellow pine timber, which cannot be replaced.”

Two Caterpillar bulldozers were sent to Long Leaf by special order of top military brass in Washington to harvest these trees. One remains on view to this day. An M4 passenger railroad car carries visitors on a circle track around the Southern Forest Heritage Museum. Vehicles of this type were formerly used to transport workers from mills to logging sites. Photo by Jason Rose.

While most of Louisiana’s big mills closed in the early decades of the 20th century, Long Leaf continued buzzing until the gears were suddenly halted on Valentine’s Day 1969. Sagging demand for big timber products and a shortage of adequate timber supply led to the mill’s closure. It sat untouched in the forest for the next 25 years as an unintentional time capsule.

“The story is that they just came in and said ‘boys go home, we’re closing,’” says museum director Claudia Troll. “That’s it. And it was such a shock that we even have places in the saw mill where the lunch pail is still sitting there where it was left.”

The Crowell Sawmill Historic District was added to the National Register of Historic Places in 1993, and the complex became the Southern Forest Heritage Museum in 1994. At Long Leaf visitors view what is billed as “the most complete collection of steam-powered logging and milling equipment known to exist,” including the sawmill, boiler house, planer mill, drying kilns, a machine shop where an elaborate belt-driven system still powers the equipment and a roundhouse that contains vintage locomotives. Portions of the company town also exist: the commissary, post office and the residences of the salesman and superintendent.

“There are only a few sites in the whole country where you have something like this in its entirety from the golden age of American logging,” says Lueck. “We have the complete mill—everything involved in the manufacturing process. No place else in the country has that, anywhere.”

David Johnson is editor of Louisiana Cultural Vistas and KnowLA.org, the Digital Encyclopedia of Louisiana. For more information on the Southern Forest Heritage Museum, visit forestheritagemuseum.org.

When Lumber Was King

The showy and richly ornamented wooden houses that became popular in the late-19th and early-20th centuries are a hallmark of small towns and residential districts in Central and Northern Louisiana.