Ghosts of the Gulf

The 2010 BP Deepwater Horizon (DWH) oil spill was the largest environmental disaster in the history of the United States. The Gulf of Mexico is one of the most important and biologically diverse environments in the world. It is a nursery for thousands of marine species, and numerous endemic organisms inhabit these warm waters. Gulf seafood is an important source of food for millions of people in North America, and, as marine species migrate following the Gulf Stream, people throughout Europe rely on these fish for protein. As such, the DWH spill could not have occurred at a worse place, from an ecological and economic standpoint.

The tremendous amount of oil itself (estimated at 206 million gallons) created an immediate kill zone greater than two hundred kilometers wide, wiping out enormous numbers of marine life. Even worse, BP utilized upwards of two million gallons of chemical dispersants such as Corexit 9500, which made the effluents as much as 52 percent more toxic than the oil itself and much more widespread. According to the Material Safety Data Sheets for Corexit 9500, produced by the chemical manufacturer Nalco, no prior toxicity studies had been conducted before its use in the Gulf. However, numerous toxicology studies had previously found such dispersants teratological to marine wildlife and carcinogenic to humans. Regardless, BP applied dispersants in deep sea as well as surface water and, because of normal currents, spread contaminants throughout the Gulf, eventually coating thousands of kilometers of the Gulf floor with toxic sludge while, on shore, impacting over one thousand miles of fragile estuary ecosystems and beaches. A recent United States Congressional Report estimates that, after clean-up efforts, almost half the oil (over one hundred million gallons) remains in the Gulf.

These images were made by chemically clearing and staining species collected in the Gulf after the DWH disaster. These species, once common, may now be in decline and are meant to be seen as apparitions. The clearing and staining process involves first preserving specimens, then placing them in an acid bath with blue stain, which adheres to cartilage. Next the specimens are masticated in a digestive enzyme called trypsin, which begins the clearing of other tissues. Then the specimens are bathed in an alkaline solution with red dye, which bonds with bone. The final stages transition the specimens through a series of baths from potassium hydroxide to glycerin, whereby the specimen tissues become transparent except for the bones and cartilage, which are vividly dyed red and blue. The final specimen looks like a brightly colored X-ray, revealing the complex architectural anatomy of these beautiful and disappearing species.

Brandon Ballengée, PhD, is a visual artist, biologist, and environmental educator based in Louisiana. In 2016 he and his wife Aurore Ballengée started the Atelier de la Nature, an outdoor education center and nature reserve, in Cecilia/Arnaudville, Louisiana. 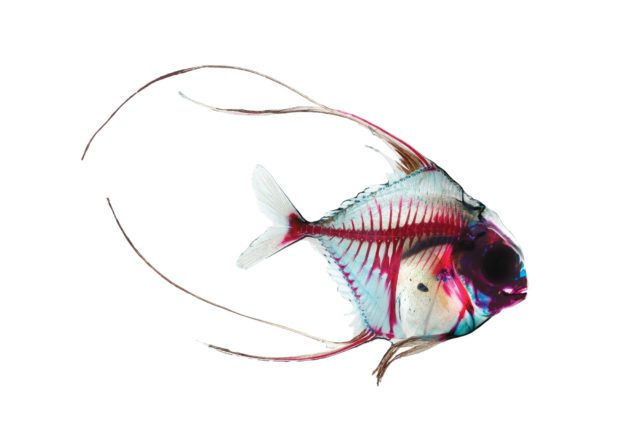