Three hundred years ago, in the summer of 1719, the first slave ship arrived in Louisiana. Its voyage had begun the previous year, around the same time that Governor Jean-Baptiste Le Moyne, Sieur de Bienville, had put gangs of Native Americans and French and Canadian convicts and soldiers to work clearing the ground where New Orleans would rise. The ship was called the Aurore, and its captain and crew had spent two months purchasing a cargo of 201 enslaved Africans from the kingdom of Whydah (in present-day Benin) before embarking both captives and crew on the months-long transatlantic crossing that led to the Gulf Coast. Two hundred of the captives survived the journey. Among them—assuming the captain followed orders from his superiors—were individuals skilled in planting and cultivating rice, a crop that would help sustain Louisiana’s starving colonial population, and barrels of the grain for seeding.

The enslaved men, women, and children unloaded from the Aurore onto Dauphin Island in 1719 were the first to arrive by slave ship, but they were not the first Africans in the colony, nor were they the first people enslaved by the French in Louisiana. The earliest reference to one person owning another in Louisiana can be found in a sacramental record for an unnamed Indian child baptized in Mobile, Louisiana’s first colonial capital, in 1704. Three years later—also in Mobile—a French priest baptized a seven-year-old African boy, Jean-Baptiste, presumably named after his owner, Governor Bienville.

The first eight slave ships bearing Africans to Louisiana dropped anchor at the ports of Dauphin Island and Biloxi. (Both towns were part of the Louisiana colony until 1763.) New Orleans saw its first direct arrival in 1723, when the Expédition offloaded some eighty-eight enslaved captives purchased in Senegambia onto a plantation across from New Orleans on the Mississippi River’s west bank (now part of the Algiers Point neighborhood). This plantation—like the slave trade—was operated by the Company of the Indies. 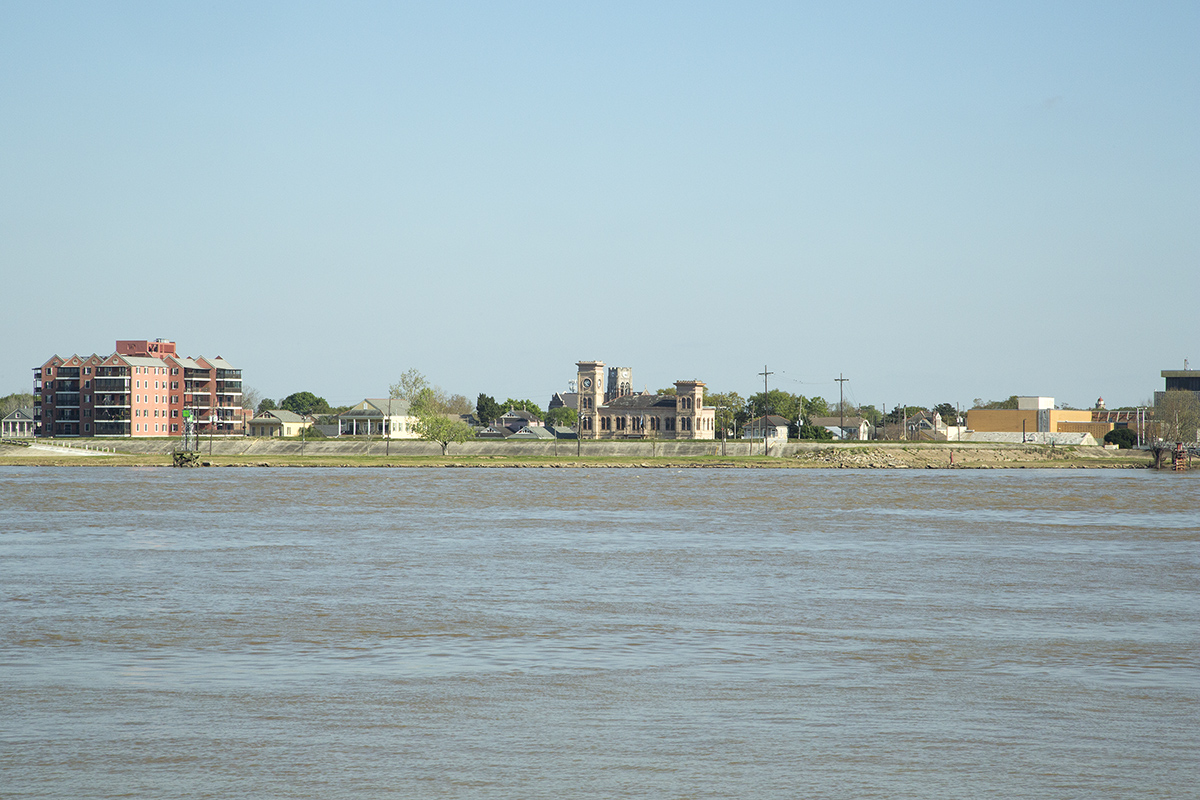 Now known as Algiers Point, the land directly across the river from the French Quarter was once the primary port of disembarkation for captive Africans brought to Louisiana in the transatlantic slave trade. Photo by Melissa Carrier, courtesy of The Historic New Orleans Collection.

Between 1719 and 1731, the Company of the Indies oversaw the purchase and forced transatlantic transportation of more than 6,700 Africans from West and West Central Africa to Louisiana. Some captives rose up in rebellion, attempting to overthrow ships’ crews and gain their freedom. Others, like two women onboard the frigate Galathée in 1728, chose to end their own lives, jumping overboard and drowning rather than face an uncertain and unfree future. Just over six thousand individuals survived the poorly provisioned and disease-ridden environment of the Middle Passage. After a journey at sea that spanned an average of eight to ten weeks, they disembarked in Mobile, Biloxi, and, increasingly after 1723, New Orleans.

Later in the eighteenth century, after France transferred Louisiana to Spain, an additional 4,400 documented Africans arrived in shackles to be sold to the highest bidder. Taken from ports in Senegambia, the Bight of Benin, and the Congo River basin, the captives came from diverse cultures, religious and linguistic backgrounds, and ethnic groups. “Wolof, Bambara, Mandingo, Fulbe, Nard, Ganga, Kissi, Susu, Mina, Fon, Yoruba, Chamba, Hausa, Igbo, Ibibio, Kongo/Angola, [and] Makwa” peoples were, according to a recently erected historical marker, among those forcibly transported from Africa to Louisiana.

New data released this spring on slavevoyages.org show that an additional 8,700 enslaved men, women, and children arrived in Louisiana from the Atlantic and Caribbean colonies of Barbados, Cuba, Dominica, Guadeloupe, Jamaica, Martinique, Saint-Domingue (now Haiti), South Carolina, and St. Vincent between 1736 and 1808. They brought with them identities shaped not only by their African heritage but also their lived experiences in the Creolized environments of the English-, French-, and Spanish-speaking colonies.

The Aurore’s 1719 arrival touched off a large-scale trade in human beings between Africa, the Caribbean, and Louisiana that spanned more than one hundred years, with the last documented transatlantic slave ship, the Fénix, arriving in 1830, twenty-two years after the United States officially outlawed the international slave trade. In this, the three-hundredth anniversary of the arrival of the first slave ship to Louisiana, we remember lives shattered. We remember the strength of those who persisted, and we remember the ancestors.

Erin M. Greenwald is a historian and Vice President of Content at the Louisiana Endowment for the Humanities. She serves as Editor-in-Chief of 64 Parishes.

The Many Lives of Marie Baron